EXTRA TIME WITH WE UNITED

In response to COVID-19 and a strict lockdown in Nepal, WE United started a LIVE series on Facebook in May 2020 called EXTRA TIME with WE United in hopes to bring our community together.

EXTRA TIME takes a unique approach to interviewing women WE admire, women who are breaking barriers, and women who are inspiring younger girls and other women to empower themselves. The series  focuses on themes of women empowerment, women in sports, community building, repicturing women and physical and mental health — especially in times of crisis.

Maya Lama is a Nationally Certified Referee from Nepal. She has served as a lead referee in many WE United events, including the Mahila Premier League. She is also a sports teacher at Padmakanya H.S. School.

Maya Lama was born in Kavre, Nepal. She moved to Kathmandu to pursue her education when she was 12. She started practicing karate in the same year and earned her black belt second dan 10 years later. After being a National Karate player, Maya shifted her career to football refereeing but she still coaches karate at different schools. 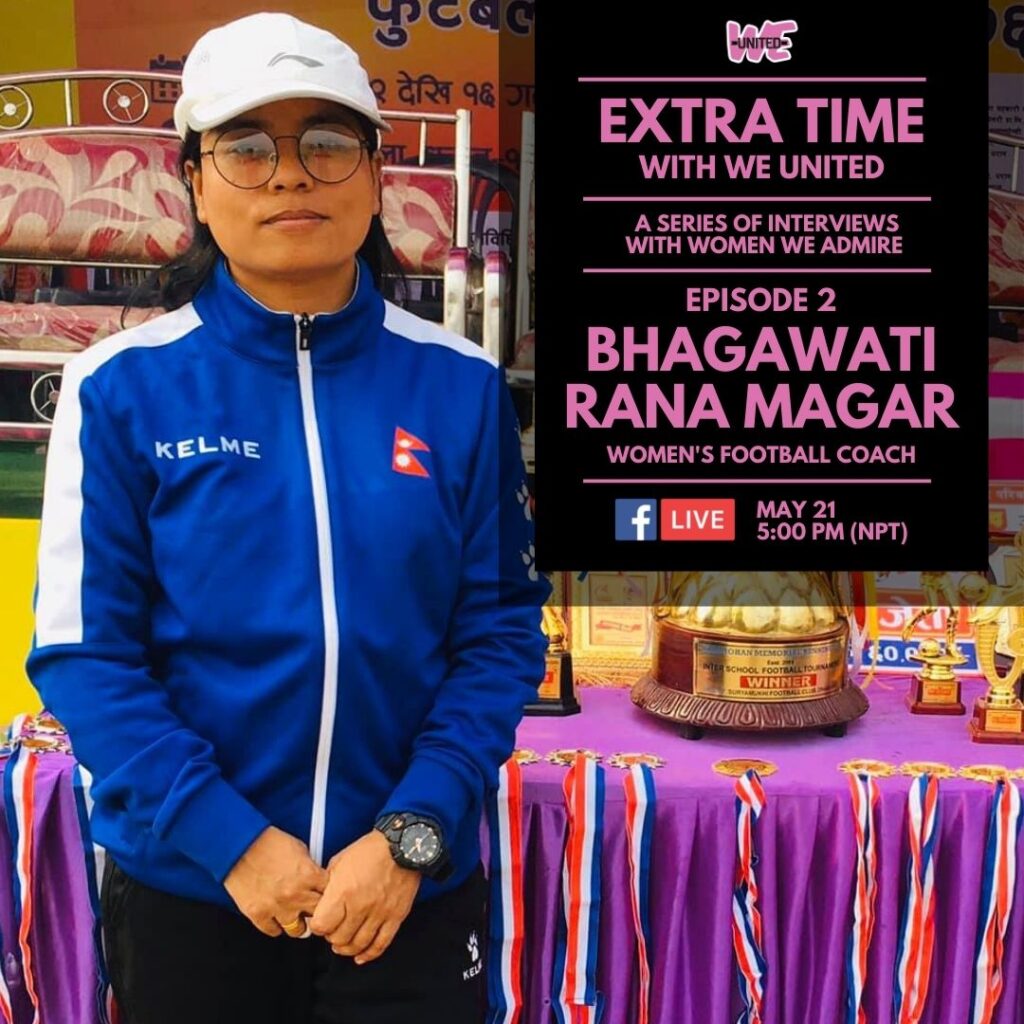 Bhagawati started playing football, and even coaching, at an early age. When she was just 21, she started her coaching journey in Dharan. Bhagawati went on to become Assistant Coach of Nepal’s U-14 Women’s National Team in 2014 when her team won the gold medal in the Asian Football Confederation (#AFC) U-14 Girls Regional Championship hosted in Nepal.

Bhagawati was the Assistant Coach of the women’s national team in 2018-19 as the team finished second in the SAFF Women’s Championship hosted by Nepal.

Sadina Shrestha grew up in a sports loving family; both her brother and sister played for Nepal’s National Football Team. Sadina also grew up playing football, but when she moved to a new school as a teenager, she was introduced to basketball and started competing in tournaments.

Ever since, Sadina has dedicated herself to the game. Sadina joined the National Basketball Team in 2011. She played her first international game in the same year in Sri Lanka, which was also Nepal’s inaugural international game. 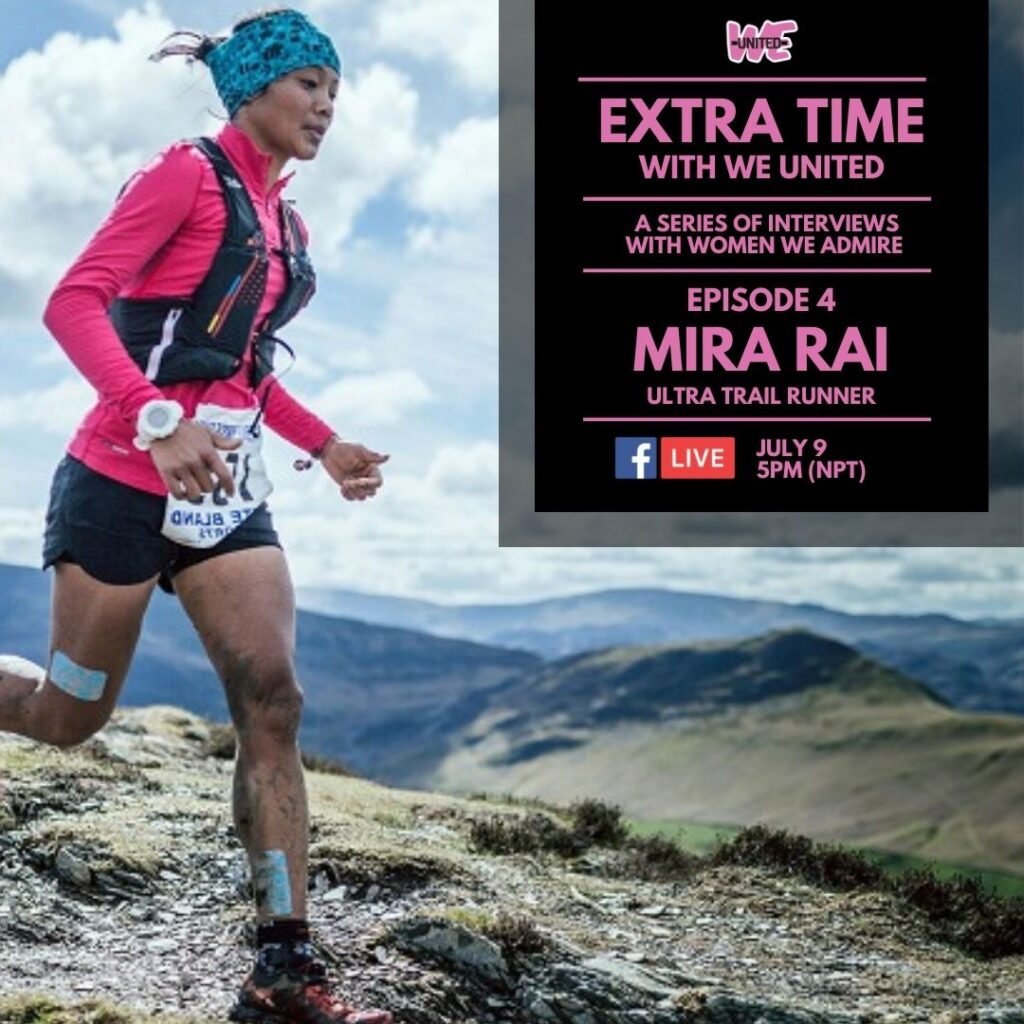 Mira Rai is already one of the best long-distance runners in the world at only 30 years old. She won her first 50K race without training, which launched her successful career.

In addition to her many medals, Mira received the National Geographic Adventurer of the Year Award (2017) and Asia Change Maker Award (2018). In 2017, Mira established an NGO called the Mira Rai Initiative to inspire young female athletes on their trail racing journey. 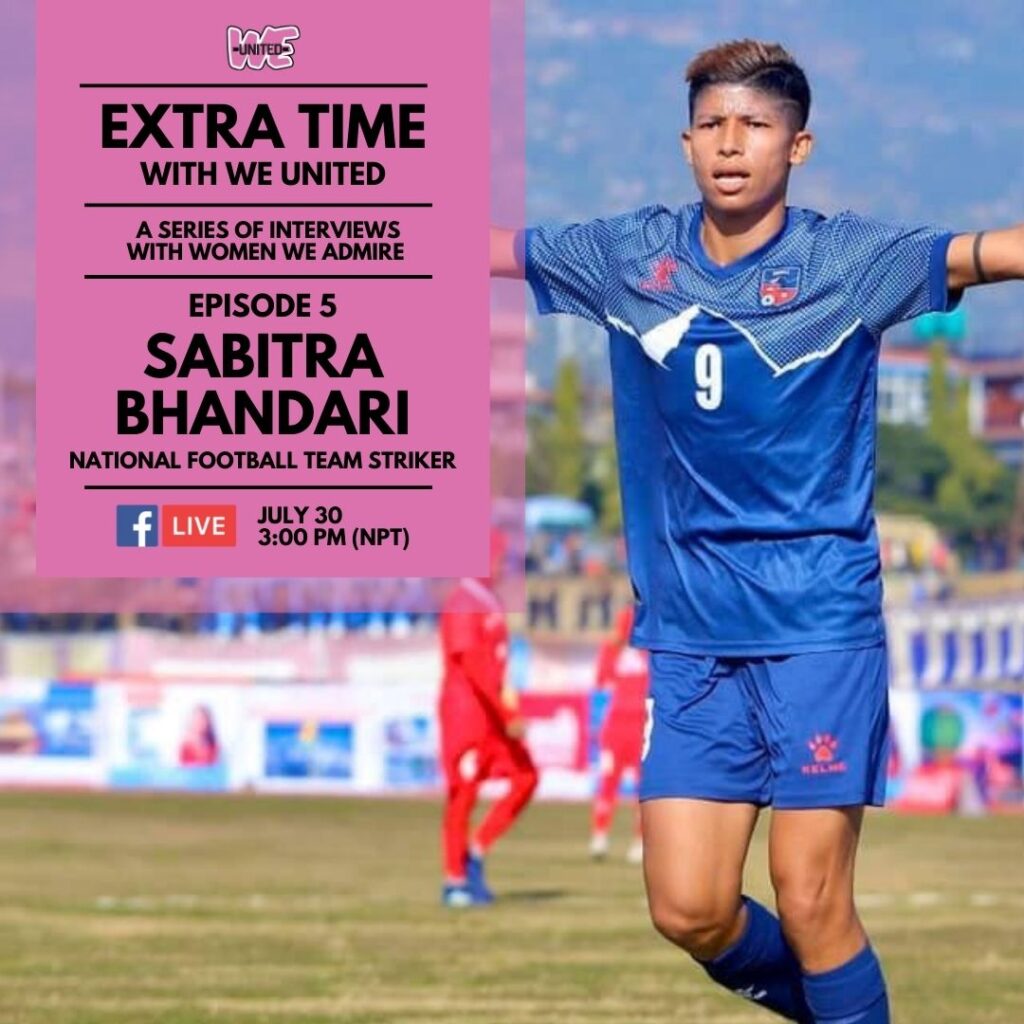 Sabitra Bhandari, popularly known as Samba, began her journey playing football barefoot with a ball made of socks. She used to play in local games, and had always stood out with her performance since her early days.
Samba played for Sethu Football Club in 2018-19 and helped them clinch the Indian league title that year. After playing with them for a season, she transferred to Gokulam Kerala FC where she helped them win the league title in 2019-20, finishing the league as the highest goal-scorer with 16 goals. She has impressed the Indian crowd with her pace, silky moves, and sensational strikes. Samba holds the title of the highest scoring Nepali footballer with 38 goals. 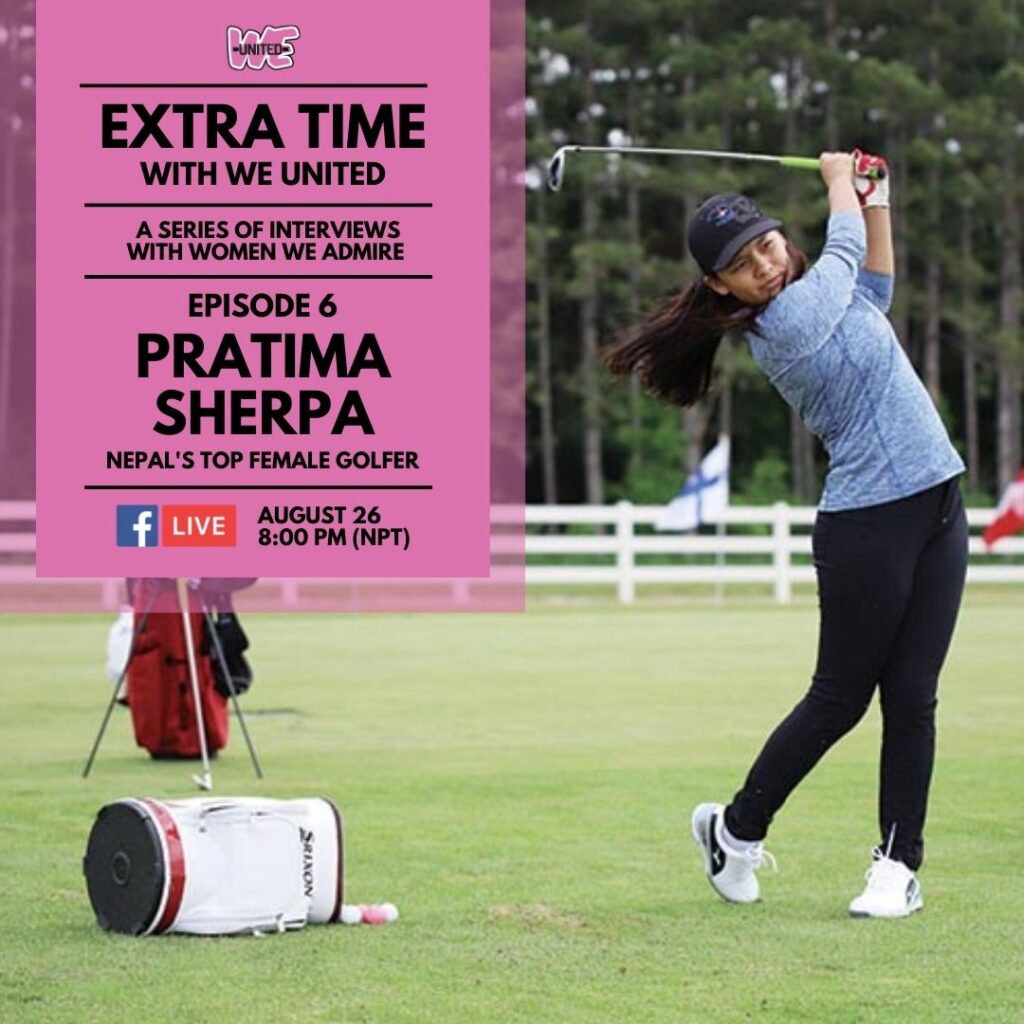 The Royal Nepal Golf Course was Pratima Sherpa’s childhood playground. Pratima lived with her parents in a maintenance shed between the third and fourth holes. She grew up watching smartly dressed men, and occasionally women, playing golf. Her early exposure to the game sparked her interest; when she was 10 years old her father carved her first golf club from a wooden branch.

Pratima was featured on the Forbes Asia “30 Under 30” List in 2020. She was also recognized as a 2020 Game Changer by The Malala Fund, which highlights female athletes around the world who defy convention on and off the field. 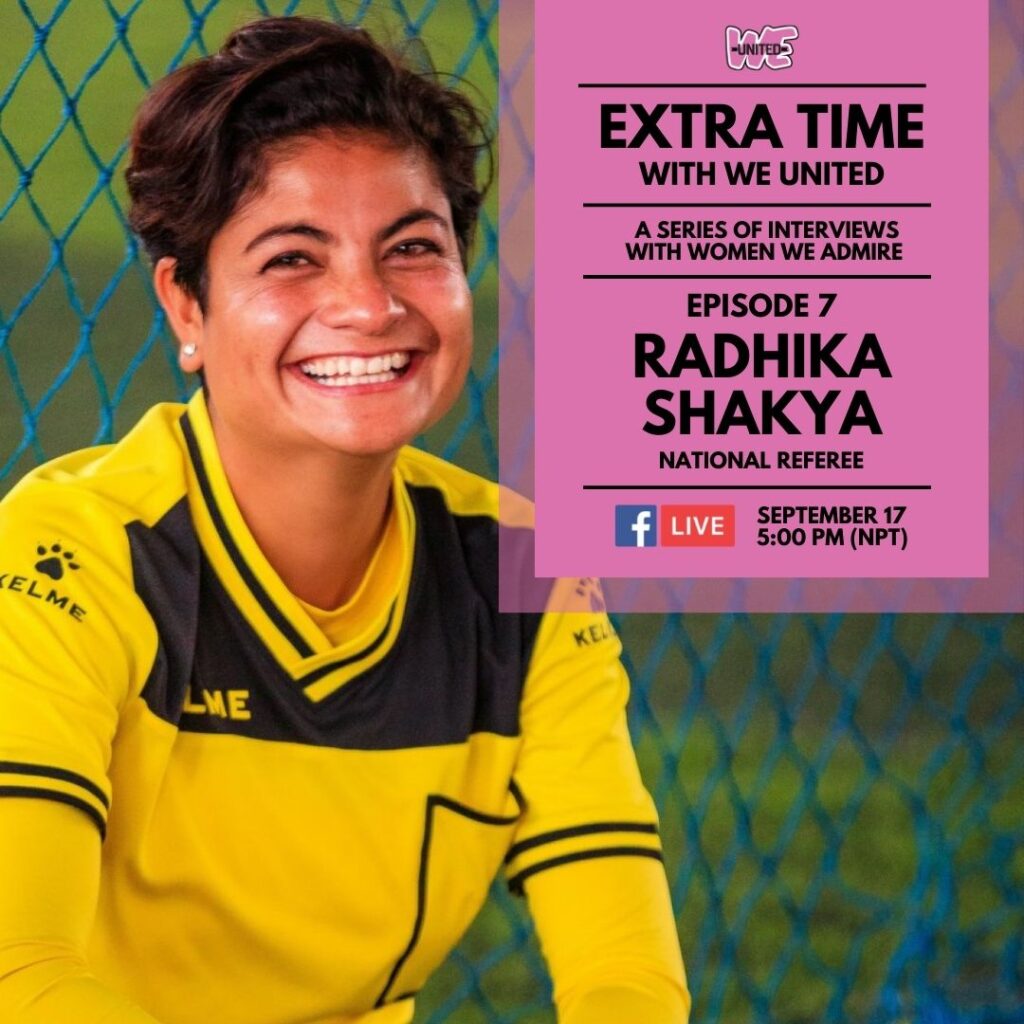 Radhika Shakya was a volleyball player, football player and a rugby player before she became a football referee. Today, she is one of very few women taking the lead in this profession, breaking barriers and advancing gender equality in a male-dominated occupation.

Radhika entered the sports world as a volleyball player during her school days. Later she began playing football, and in 2006 – 2012 she captained the Kathmandu district team and played in many other national level games. In 2016, Radhika also played rugby for Nepal’s national team! 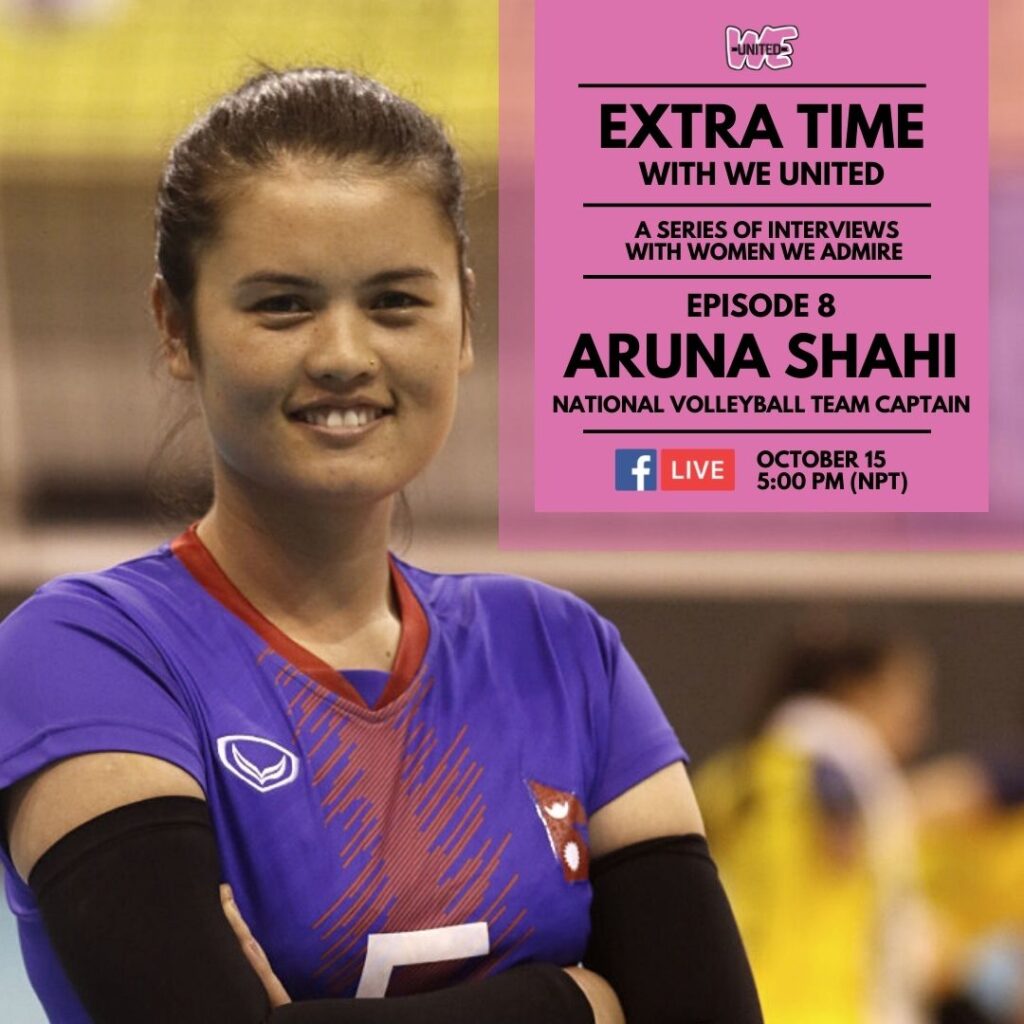 Aruna Shahi was born in Myagdi, in Gandaki Pradesh. She became fond of volleyball in 2008 when she started playing the sport at school. She enjoys the fast pace of the game and the challenge of making quick decisions.

Aruna has been a significant player of the Nepal Women’s National Volleyball Team since 2014. She was given the captaincy role in 2019 and led her team to multiple successes including winning one of the major international tournaments, the Asian Volleyball Confederation Central Zone Senior Women’s Volleyball Tournament in Bangladesh, as well as the silver medal in the 13th South Asian Games (#SAG) held in Nepal. 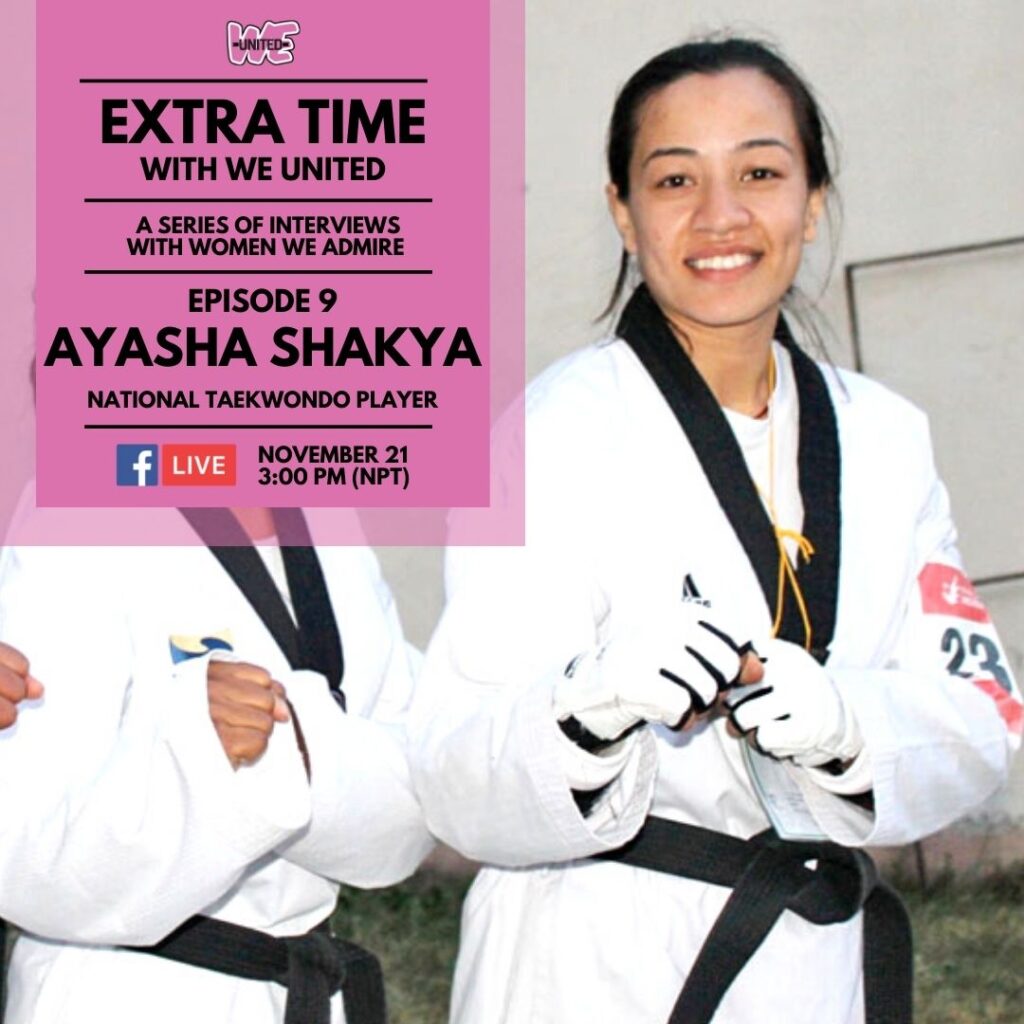 Ayasha Shakya, two-time gold medalist at the 13th South Asian Games, has pushed boundaries and raised the bar for all Nepali athletes. Shortly after having her second child, she became the first South Asian woman to win gold medals in Taekwondo’s Poomsae and Kyorugi categories.

Now, married to Taekwondo legend Deepak Bista, and a mother of two boys, Ayasha wants to set an example for women and girls who are passionate about sports. She wants to prove that women can balance their responsibilities as a mother, wife, daughter, and daughter-in-law along with pursuing their passion and career. 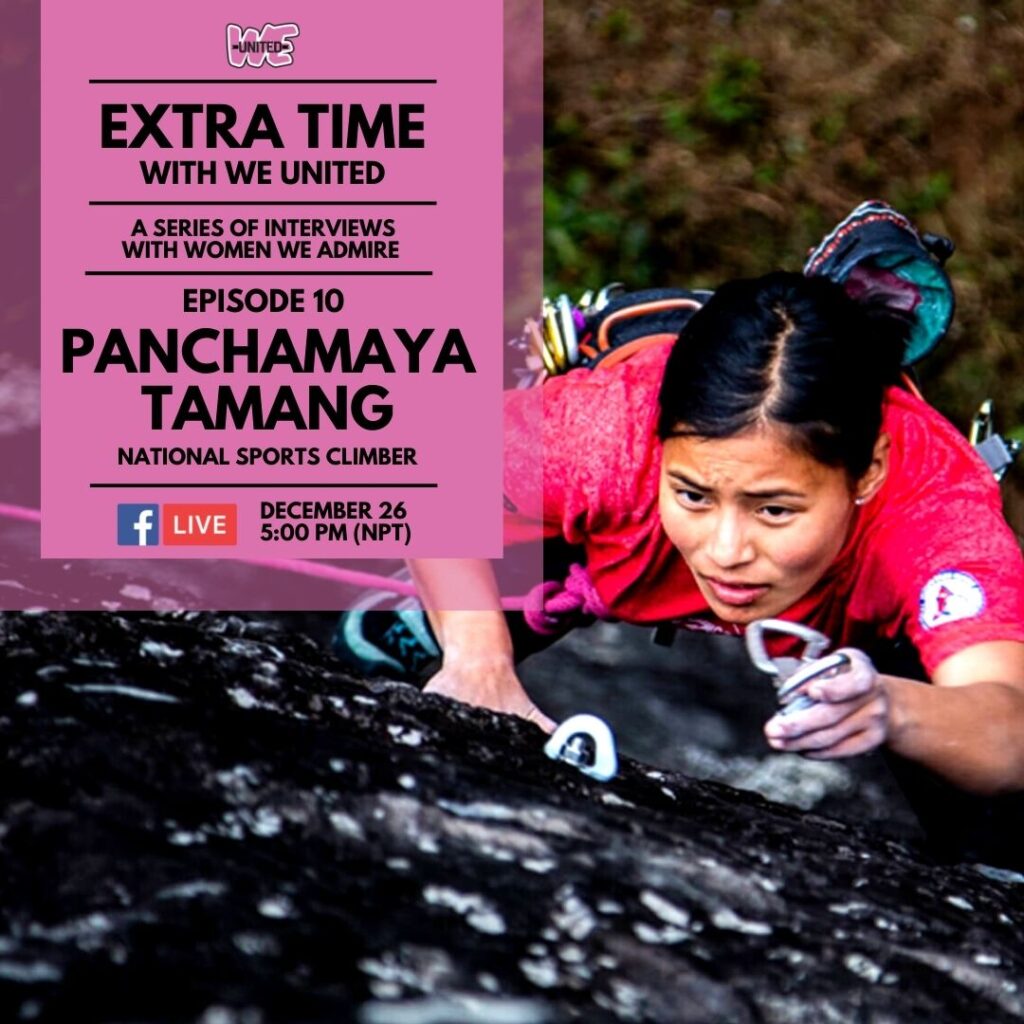 Panchamaya Tamang is the youngest sports climber in Nepal. She started climbing when she was 13 years old in 2013. She won the first competition she participated in and has been dominating all the local and national level competitions since then.

Panchamaya also earned a black belt in Taekwondo when she was in grade 8. With participation in over 30 rock climbing competitions, Panchamaya has been able to make a name for herself at just 20 years of age.